The beautiful desolation of Japan: The works of Hisaharu Motoda 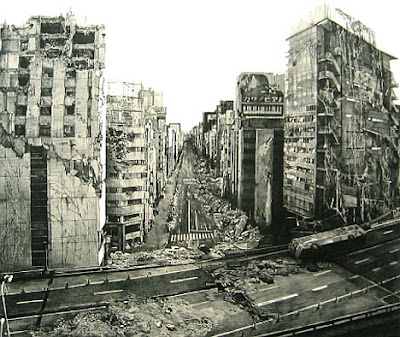 "Hisaharu Motoda is regarded by many as one of the rising stars in the world of printmaking, having won several major prizes since obtaining a Masters of Fine Arts and Music, where he now works as a teacher. His fame is spreading not only in his native Japan, but also overseas, where he has taken part in exhibitions in countries as Egypt, Canada, Hungary, and Thailand.
In his Neo-Ruins series Motoda depicts a post-apocalyptic Tokyo, where familiar landscapes in the central districts of Ginza, Shibuya, and Asakusa are reduced to ruins and the streets eerily devoid of humans. The weeds that have sprouted from the fissures in the ground seem to be the only living organisms. “In Neo-Ruins I wanted to capture both a sense of the world′s past and of the worldﾕs future,” he explains.
Motodaﾕs view of the future at first seems nihilistic, but the proliferation of plant life in the ruined streets seems to suggest that there are other ways for the plant to survive even after our great cities have fallen." 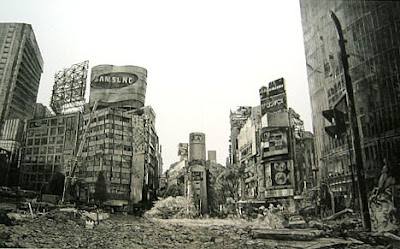 If you think of Japan, you may have a strong image of beautiful nature and oriental culture. However, after experiencing the period of the high growth of economy, Japan now suffers environmental disruption everywhere. When you come to Japan, you might not even find it beautiful. It is a pity, but it is true. Recently, the government and local government took it seriously, and started to consider creating a nature-friendly-environment. The awareness of people is not enough yet, though.
Japan was defeated in the World War２. Then, the Japanese culture and the way of thinking of Japanese people became more westernised. The Majority of young people in Japan don′t know much about their own culture. I was borned and grown up right in middle of the period of high economic growth.
As far as art is concerned, I believe that an expression of an artist will be different depending on the environment the artist has been living in, or has grown up. I have been searching for the way of expressing myself with Printing.
My work always has something to do with Wabi and Sabi which are the concept of the Japanese Tea Ceremony. Wabi means ‘austere refinement’ and Sabi means ‘quiet simplicity’. There is a Japanese saying ‘anything is impermanent’. Perhaps, I want to send a message “Anything is impermanen” through my work. And, I feel beauty on such fragile things, and would like to express it in my work." 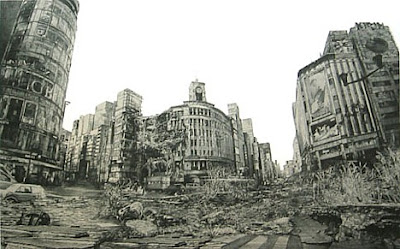 Thanks to Pink Tentacle for the tip on this great artist.
Posted by s.a.