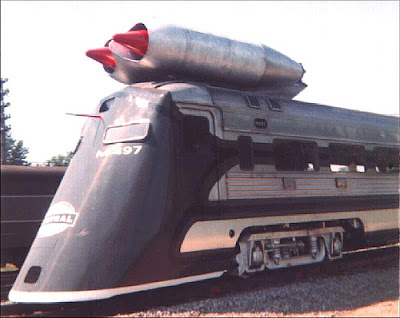 Our boys: The M-497 jet powered commuter train. Hobos lived in fear of it being put into full service..

"This jet-enhanced train car was tested (successfully) in the summer of 1966. This was the time when rail-road usage declined in America, as the interstate highway system completed its major routes and airlines drew increasing numbers of travelers. New York Central research team, led by Don Wetzel, was assigned a task to collect data on possible high-speed rail service and whether the tracks could handle high-speed passenger traffic.

Wetzel and his crew adapted two General Electric J-47-19 jet engines, which had been designed as boosters for the Convair B-36 intercontinental bomber. These were mounted just above the engineer’s station at the front of the car. Wetzel’s original design had the jet engines at the rear, but this changed after his wife, making her point with some sketches on a dinner napkin, suggested that the locomotive would look better with them mounted up front. This switch also helped keep the nose of the locomotive on the tracks. The Cleveland shop fashioned a black streamlined cowling for the front of the Budd car, which was designated M-497. Workers called it the Black Beetle." 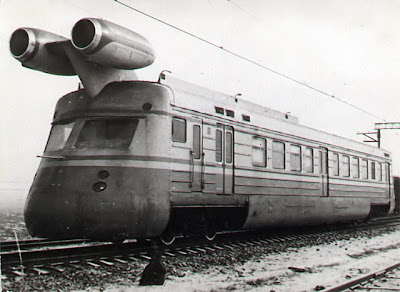 "Them": Its maximum speed was around 249 km/h (around 180 mph). And it had engines from Yak-40 passenger jet plane. It was shown at the Great Siberian Railway main terminus..but being too cold to go outside so no-one saw it and therefore its actual excistance was denied for many years,..even by its own crew.

God bless silly-assed Russian hating America. It was a glorious never-to-be vision of the future. Just imagine it dear reader: Local trains blowing through the sleepy local suburban stations at 180 MPH sucking wayward luggage and small children off the platforms, geeky life-hating trainspotters being inhaled by the screaming of the General Electric J-47-19 jet engines sadly even before they could even take its number and the dull, sooty, and painfully traditional blue and white pillow ticking of the engine drivers uniforns being replaced by the bright silver of Chuck Yeagers hand-me-Downs.

I will shed a single tear for the future we were deprived of.....
Posted by s.a.