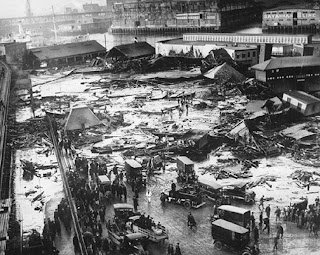 Not to blow the surprise, but if you happen to live in Boston, your parents and grandparents have probably already spoken, with hushed seriousness, of this certain day (January 15, 1919) though you may have replied, "Right, sure -"

Liquor has always been a big cash cow. It is with no exaggeration that businessmen have said that you can't go broke investing in sin, and an almost guarantee big seller has always been alcohol. Cheap materials, easy to produce, high profit margin, and with addicted consumers, booze is an entrepreneur's dream, especially before 1919. But this WAS 1919, and a nightmare was lurking not too far away. A nightmare, that is, for those Americans who like a little sip now and again, and for the business that tried to meet that tipsy demand. In other words: Prohibition.

It was no wonder that the Purity Distilling Company of Boston, Massachusetts tried, before Prohibition went full-swing, to push the limits of their steam-heated, 2 million storage tank by … shall we say, 'a bit too much' … and subsequently caused what has been called one of the most bizarre industrial accidents in American history.

Okay, I won't keep you waiting too long (god knows what people's attention-spans have deteriorated down to, what with the intervention of the web, and all), the prime ingredient used in the manufacture of rum is good-old, slower-than-in-January, molasses. So, ladies and gentlemen of cyberspace, I present to you: The Great Molasses flood. 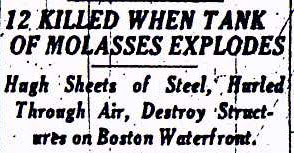 In an irony only found in truth, this event really did take place during January, through, alas, an unusually warm January. Had the weather been a bit more typical, this really would have been a really comical flood - one in which the "victims" would have had time to notice the on-coming calamity, pack their things, move all their belongings, and maybe even have a leisurely meal, before the brown wall of molasses would have gotten them. But, as I said, the weather was anything but typical: forty three degrees, almost shirt-sleeve, a beautiful day in old Boston town. Women were doing their washing and cleaning, sailors were strolling the cobblestone streets, the Boston elevated railway (the EL) was clicking and clacking overhead, and, in general, it was a very typical morning. But the Purity Distilling Company was going full-bore, topping off its huge tank of steam heated, so as to flow better, molasses. I've read several different accounts trying to pin down exactly happened that day, a bit before noon. They all agree, pretty much, on the cause and the culprit, but what's funny is that they get a bit fuzzy in regards to what happened to that 2 million plus tank. Locals reported, at first, a banging and tapping sound, then the rivets holding the tank popped free (sending post-traumatic Doughboys diving for cover) and then "it" happened. Ranging from "explosion", to "rupture", to "implosion" the descriptions all agree on one definite fact - a little over two million gallons of warm, sticky molasses ... well, how else can I put it? Got away …. 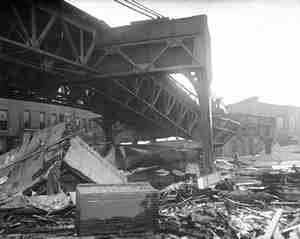 Located at 529 Commercial Street, in the North End, the tank burst, sending huge hunks of steel whirling down into the town, and a wall of sticky doom rolled down into Boston. It's hard to think of flowing molasses as terrifying. I mean, seriously, go into your kitchen and get some. Go ahead ... I'll wait. Got it? Good, now open it up and pour it at your feet. Yeah, I know, this might take a while. You might want to catch up on some reading, do some housework ... Geese, look at the dust on those cabinets. Still nothing? It's just slowly creeping out? Well, you see what I mean: molasses just doesn't make it onto the creepy scale. Okay, there's a slight similarity to The Blob, but molasses won't exactly put the fear of sugar into Steve McQueen. A diabetic, sure, but Steve McQueen? Hardly. But as one of the prime tenements of horror goes, a little something might not be frightening, but a LOT of something is terrifying.

But brown, slow, sticky, sweet molasses in 1919 certainly was. 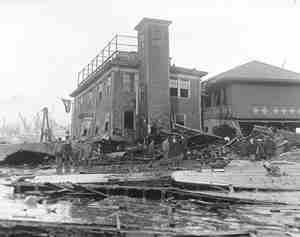 Steam-heated, and moving a LOT faster than one would normally expect, with a dull, muffled roar the brown goo surged out from the Purity Distilling company's crumbling storage tank and rumbled down into Boston's North End. Carrying along huge, jagged sections of the tank, the wall of molasses crushed trolley cars, swallowed trucks, horses and carts, and knocked buildings off their foundations. Flying debris from the tank smacked into, and crushed, a firehouse, trapping many inside and killing one. Some of the tank, propelled by both its collapse as well as the surging brown terror, tore into the supports holding up the Atlantic Avenue elevated train, twisting and snapping the steel tresses and collapsing the track. A heroic motorman, seeing the wall of sticky doom roar into the supports and the rails ahead vanish into the cascading molasses, reacted with enviable cool - walking to the rear of the coach and reversing the engines, stopping the train from dropping off the tracks and into the molasses. After an experience like that, one can naturally wonder if any of those people, and that motorman in particular, developed hysterical diabetes or at least took their coffee less sweet. The wall of sugary destruction continued on its path down into Boston, the 15 foot high roaring monster swallowing people, horses, and property - tearing apart buildings, turning clapboard into splinters, and brick walls into tumbling avalanches of shearing stone. The greatest fatalities seemed to have been in a Public Works building, where a number of municipal employees were eating their lunch. The molasses slammed into the building, shattering it, and throwing fragments fifty yards further into the city. A second city building was similarly torn from its foundations, the tenement above collapsing into kindling. Literally a tidal wave, the molasses swallowed dozens of people, rolling and crushing them under its brown mass. Dozens were critically injured by the debris picked up and carried by the sticky mess, while others were simply crushed to death by the heavy sweetness. Slowly, as the molasses began to congeal, it's 35mph assault ebbed but by then it was too late for the 21 people killed by collapsing buildings, swallowed by the fatal sugar, or the 150 others injured. Sailors from the anchored Nantucket were the first to arrive, trying to pull survivors from the molasses, and giving aide where they could. Horses, their legs broken, screamed and thrashed in the sticky mess - silenced only after being put down by the pistols of the Boston police. The clean-up of Boston was almost as surreal as the flood itself. Hoses were run from the harbor, and saltwater was used to try and clean up the mess. But saltwater and molasses were not a great mix, and soon the whole area was buried under a foaming brown mess. Molasses is rather persistent stuff: the town was covered with it for months. Anyone who had anything to deal with Boston felt its presence in some way: a brown stain, a street as sticky as a cinema floor, the pungent aroma of sugar hanging over the city like a nauseating glaze.

Never has death been so sweet. 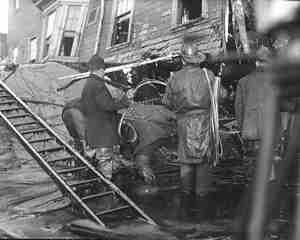