Welcome to Weirdsville: The Turk 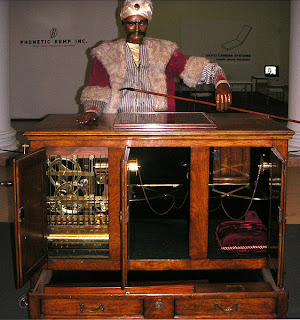 A wise man once said (I think it was me) that machines are like the chrome that frequently ornament their forms: a funhouse mirror reflecting us, their creators.

Machines, it’s safe to say, have certainly taken on some very bizarre forms, reflecting god-knows-what about their creators. After all, what does it say about man when he creates such wonders as the heated bra (to prevent embarrassing nipple excitement), electric nose hair trimmers, a machine gun designed to shoot around corners, dial-a-prayer, barbed vaginal inserts to wound rapists, vibrating shoes to keep feet from falling asleep, and a myriad of other gizmos, doohickey’s, thingamajigs, and whatchamalcallits that have sprung from the collective minds of man like a clockwork goddess ... or a demented jack-in-the-box.

Frankly, as a species we’ve had far too much practice creating completely twisted - and even possibly functional - gadgets for me to wax sarcastic about even a small fraction of them. From the KGB’s poison-pellet shooting brolly, to selling your soul on the internet, from the hinged ship designed to twist over waves, to wind-up erotica, warped technology is a long and very noble tradition for us homo saps. We are, remember, the same bunch of genes and cells that has evolved over millions of years to where we now have the means to utterly destroy ourselves with the greatest of ease by just pressing one button.

Picking the first one to start off with was a bit of a challenge. Until, that is, I remembered the tale of the miracle chess playing machine: a gadget that turned out to be possibly more human that it's creator.

When it first showed up on the scene, displayed with theatrical bravado by it’s creator, Wolfgang van Kempelen, it wowed and amazed those who are rather tough to wow, let alone amaze. Now, in these years of internet porn and microwaveable chili fries, we might look at dear old Wolfgang’s mechanism with a certain degree of scorn. Yet remember that it was just this year that a machine, a certain little gizmo called Big Blue, actually beat a grandmaster at chess. So don’t treat poor old Wolfgang with too much contempt, because while not perfect he did make his machine quite adept at this ancient game: in 1770.

To say that this machine amazed all who saw it would be a technical (ouch) exaggeration: it was a big hit. People from all over Europe flocked to see Wolfgang’s marvelous chess-playing machine. Paris, Vienna, and even Russia were treated to performances of the gizmo. In Paris, matter o’ fact the great American gadgeteer Benjamin Franklin was said to have examined the device, though if he lost or won is unknown.

In the rollicking year of 1805, Wolfgang sold his ingenious mechanism to Johann Maelzel who took it on another whirlwind tour, even bringing it to Napoleon, who played a game ... again whether he won or lost is not known. But if Johann was any kind of bright-boy it would be safe to say that the Little Corporal had a victory on that battlefield as well. 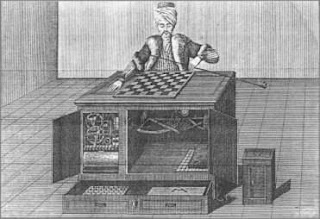 Over the following years, the wooden-boxed marvel of engineering passed through a variety of hands, eventually making its way to America in 1834 and to an exhibition viewed by one very astute (and more than a little twisted) writer. Watching the machine in action, seeing how only one door in the device was opened at any time, showing a hideously complex puzzle of gears, levers, springs, coils, and pulleys, this writer revealed the shocking mystery of the chess-playing machine in the pages of The Southern Literary Messenger.

What Edgar Allen Poe reported was that Wolfgang’s great machine had but one real moving part ... and his name was Schlumberger, Monsieur Schlumberger - a diminutive French chess master. Before you ask, the answer is non: Mssr. Schlumberger wasn’t part of the original warranty. During Wolfgang’s time, it was said, the machine was secretly operated by a Polish amputee named Worowski.I have but one thing to add to this surreal tale of the man behind the machine, the bogus chess automaton: anyone take a real good look inside Big Blue?

I mean a real GOOD look?

you have a real good point about Big Blue...

Not that I expected someone sits inside the server box, but wh o actually confirmed that the server is not linked to a few hundrend other expert players out there online?