One of Our Favorite Heroes: Big Guy

The Big Guy and Rusty the Boy Robot is a comic book by Frank Miller and Geof Darrow and an eponymous animated television series.

"Big Guy and Rusty, the Boy Robot" appeared under Dark Horse Comics' now defunct Legend imprint as a large format comic book published as a two-part mini-series in 1996, featuring story by Frank Miller and art by Geof Darrow. In the comic, the story revolves around an attack on Tokyo by a giant reptilian creature that is generated in an experiment gone wrong, and the failure of the newly-commissioned Rusty the Boy Robot to stop the threat. Subsequently, Japan requested help from the U.S. Armed Forces, whose ultimate defense, the robot Big Guy, launches from his air carrier base and uses his awesome arsenal and good old-fashioned American know-how to save the day.

The animated series, produced by Columbia TriStar Television and Dark Horse Entertainment, aired from 1999 to 2001, and in many aspects is a more mature and established series. Whereas the comic book seems like only an introduction to the robots, the animated series is full-fledged with a strong back story which links the episodes together. The plot and setting of the series is different from the comic book as the whole story is based around New Tronic City, a fictional American city clearly modeled after New York City. Rusty is the most advanced robot with human emotional grid and nucleoprotonic powers that is going to replace the Big Guy, the Earth's last line of defense against all threats alien, domestic, or against the American way. However, Rusty is too inexperienced to stand on his own, so the Big Guy is re-commissioned to teach Rusty the way of trade. Rusty idolizes the Big Guy, regarding him as the best robot ever. Big Guy is actually piloted by Lieutenant Dwayne Hunter, who poses as his chief mechanic. Big Guy's secret is known only to a few, and many situations involve Lt. Hunter's clever and impromptu excuses to hide the fact from Rusty for two reasons: that the truth could overload Rusty's emotional grid; and Rusty has trouble keeping secrets.

The theme song is notoriously difficult to understand, with many words garbled by the intro video which includes the sounds of weapons firing. It consists of a montage with a ballad of the back history of Big Guy and the creation of Rusty, sung in a deep voice:

"Watch the skies, coming at you,
A hero of metal hue,
He locks horns with disaster,
For the red and white and blue,
Then was born a boyrobot,
Miracle of science,
Ready to battle large monsters,
Supercharged and quick on the draw,
Pretty darn good, but he needs help,
The Big Guy, he's a big deal,
Heart of gold, and fists of steel,
Clobbering evil entities, with Rusty at his heel,
Now that they're a mighty team,
The boy robot lives his dream,
To be a legend in history,
The Big Guy and Rusty!" 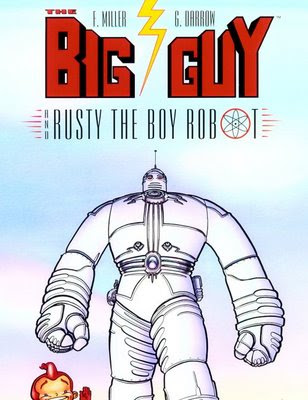